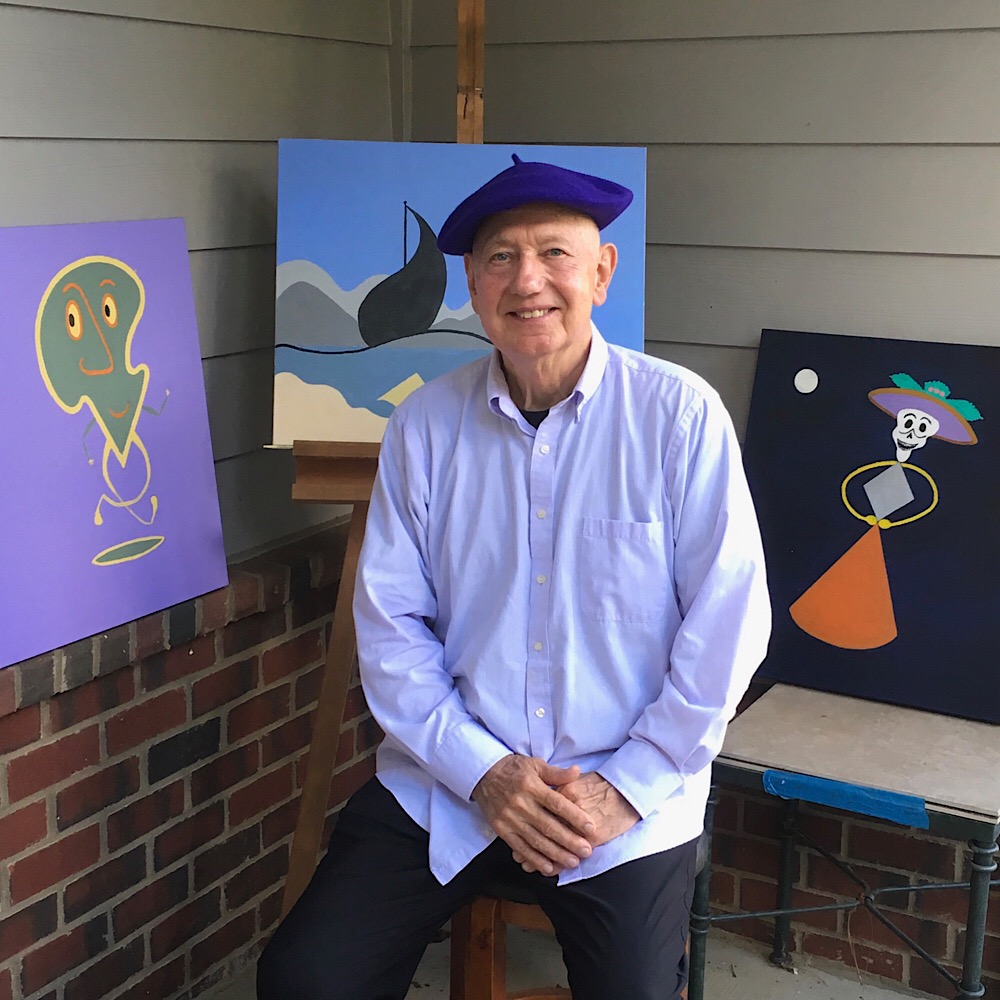 Lorenzo Gaz is an Atlanta-based whimsical realistic abstract artist who winters in Puerto Vallarta and paints street art in major cities around the world with the goal of uplifting and “making the day” for local residents as well as visiting tourists.   The photo on the left was taken recently in his Atlanta studio.

His interest in street art stems from a 2017 visit to Barcelona where his eyes were opened by the prolific, varied and world-class street art for which Ciutat Vella (Old Town) is famous along with its Gaudi architecture and the Miro, Picasso and Dali museums.   Barcelona’s street murals and graffiti inspired a series of five paintings that can be seen on his MY ART webpages. one of which titled El Amante Feliz (The Happy Lover)  serves as his signature street art.   He paints this image along with others in his La Pequena Gente Feliz (The Little Happy People) series on otherwise unattractive and mundane spaces in every major city that he visits.

Gaz’s interest in painting street art in Puerto Vallarta was inspired by a local grafitero, Misael, who is one of Mexico’s most famous street artists.   Misael’s YouTube video about his well-recognized Einstein mural in El Centro is featured in the PRESS & PUBLICATIONS section.

In June 2018, his signature image, El Amante Feliz (aka The Happy Lover) was selected by the Art-on-the-Atlanta-BeltLine panel of jurors to be one of eleven murals to be located this year on the Atlanta BeltLine and for Gaz to participate in the Art on the Atlanta BeltLine Festival that runs from July until late September.   See detailed press release at: https://beltline.org/2018/06/13/art-on-the-atlanta-beltline-launches-2018-season/ (Press and Publications section).

His 2018 BeltLine mural is representative of his art as it depicts a dynamic, happy and colorful character that is designed to make all who encounter the image smile and brighten their day.   Hopefully, you will see an intimate four-letter word (LOVE)  embedded in the white background that also is referenced in the title of the work.   Most of his art tries to convey deep, human emotions in a comfortable yet impactful way.

In November, Gaz was honored to be chosen to exhibit three pieces of his work in Atlanta’s Art Buckhead Contemporary Art Show that featured established and emerging contemporary artists across the country.    His acrylic-on-canvas painting “Mona Liza” that is his interpretation of Leonardo da Vinci’s classic piece, “La Katrina”, Gaz’s version of Catrina, the referential image of death by the famous Mexican lithographer, Jose Guadalupe Posada that exemplifies The Day of the Dead across Latin America as well as the “Naked Lady of Barcelona” inspired by Barcelona street art were selected.

To View Each Section, touch or click on the 3 parallel lines in upper right corner of page, and to View Entire Image and Details on MY ART webpages, simply touch or click on Title below photo,  then full image along with details of piece will be displayed.